THE ADDICTIVE ART OF TYING ONES OWN FLIES, NYMPHS AND STREAMERS 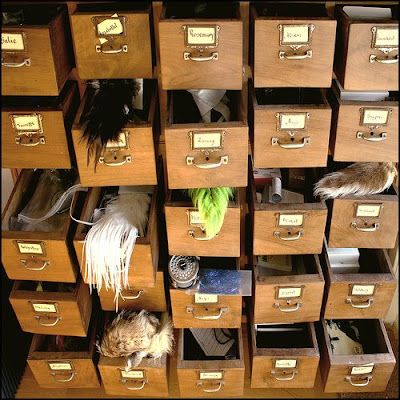 It all begins with a vast amount of skins, feathers, hairs, threads, shiny trinkets, beads, gold, silver and glittering fabrics and what have you. A whole sewing notions collection of ‘haute couture’ your average redneck homofobiac would shy away from with a shreek (high pitched). 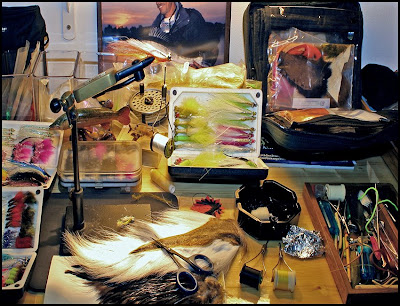 Once you have established yourself amidst the raw materials that shine on you, have a go at one of the oldest arts and crafts surrounding the mystery of fly fishing. Beware though, fly tying is hard work and extremely addictive. Rows of volumes have been written on tying patterns and insect mimicry alone. The art goes way back.

HISTORY
In AD 200 the Roman Claudius Aelianus, in his book On the Nature of Animals, described how people fished with a fly in the river Astracus in Macedonia. In the beginning of the 13th Century a German romance written in about 1210 by Wolfram von Eschenbach mentions the catching of trout and grayling using a ‘feathered hook’. The hero of the novel wades barefoot in a stream to catch trout and grayling with a fly. From 1360 onwards, across a vast area reaching from the Swiss plain to Styria, other texts identify fly fishing as the chosen method of commoners. In the early 15th Century a manuscript, kept at the Bavarian abbey of Tegernsee, lists at least fifty different fly patterns for catching carp, pike, catfish, burbot and salmon as well as trout and grayling. 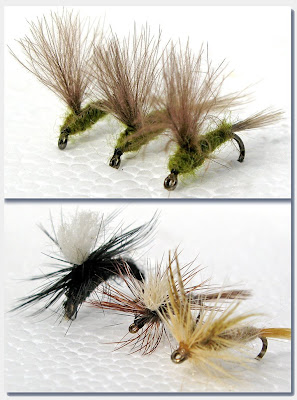 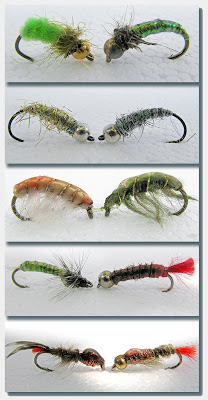 Above: a closer look at a few effective nymph patterns, weighted so they will sink rapidly to where the fish are…

You have dry flies, wet flies, streamers and nymphs. The nymph imitates the larval state of an insect born out of the waters in which one fishes. The fly fishing term ‘match the hatch’ revers to the hatching of vast amounts of nymphs rising to the surface to evolve into the adult insect and become airborne. The hatch is a moment in time in which fish feast on both the rising nymphs as the developing adults . With equipment improvement and American fishing tackle coming to England around 1900, nymph fishing slowly began to arise. George Edward Mackenzie Skues was the nymph fishing technique’s inventor and chief theoretician. Like dry-fly fishing, nymph fishing was developed in the English chalk streams. This is because such streams are fine to experiment in, with their clear water, abundant insect life, and selective fish which have become familiar with hooks due to the active flyfishing. 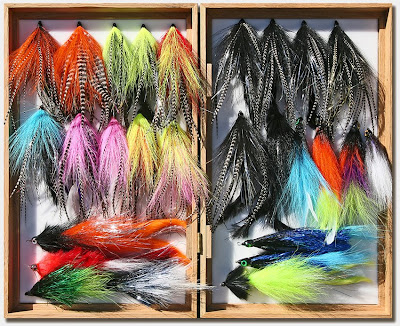 When fly fishing in 19th and 20th century developed even more, streamers where designed to lure great sweet- and saltwater predatory fish. Nowadays we have hundreds and hundreds of streamer patterns that will catch you billfish, dorado, tuna, bonefish, snook, jack, zander, perch and pike, to name but a few ferocious fish species.

Above a collection of effective pike streamers. Takes you hours to tie, cost you a fortune in feathers, but boy do they reek havoc among the Northern pike (Esox lucius)! Below: neat rows and rows of nymphs that do the trick: they will catch you fish almost anywhere in the world. 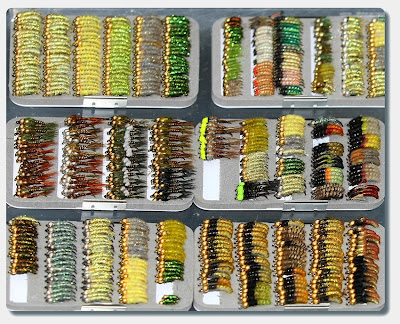