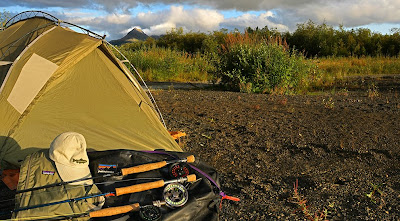 Where else than Alaska to give your gear the ultimate test? The rugged environment puts a hurting on every item you’re hauling along.

We did a floattrip on the Ongivinuk and Togiak river last September and we fly fished for salmon, grayling and trout. The weather most days was so so and that meant living in your waders for the better part of the day. The breathable waders we wore came from Simms, Hodgeman, Modulus and Patagonia. 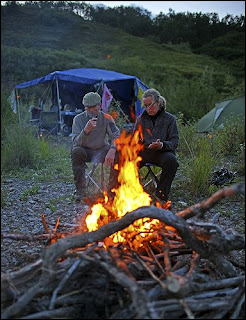 Let me lay it down for you up front: I wore the Patagonia Watermaster II (Long), one of the few waders out there my 6’6’’ long legged stature feels comfortable in. And this one didn’t end on the fire. The Hodgeman did as it started leaking along seam after seam. The Modulus did within two days with multiple pinpoint leakage problems. The Simms did the year before, and I’m talking about the Simms G3 Guide Stockingfoot wader. It leaked heavily along the…stockingfoot.
Now I know full well that one buys a wader just to have it leak on you sooner or later. My Watermaster II however is still in prime condition after two seasons of rather heavy duty. All of my Patagonian stuff, from performance baselayers, to sweaters, to rain jacket, to duffel: they held remarkably well under Alaskan circumstances. I have definitely become a full blown Patagonia fan. 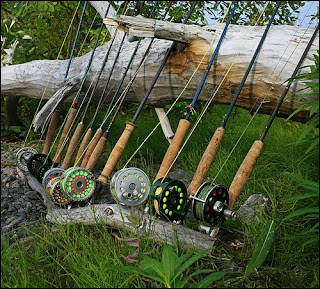 Now for the rods… We broke three # eight rods on Silvers that didn’t choose to jump but went straight for Dillingham and the open sea in one scorching run. I broke my Gatti three piece, a fine example of Italian rod builders craftsmanship but a tad on the fine side for those silver bullets in the Togiak River. So faired a new Sage TCX and a Dutch custom built eight rod that goes under the name of: ‘a fucking good rod’. My Redington Red.Fly and a Snowbee outperformed the brands with the big names altogether. ‘Dutch reels’ where used predominantly (what else?) along with a few System Two’s and the Dutch beauties did exactly what was needed of them. Simply fantastic reels, the whole series. I will spare you the details of all the knots that weren’t up to the power bursts of silvers and big rainbows, suffice it to say that in the end only true blood knots were used. Blood knots on strong tapered nylon leaders and 24 lb test fluorocarbon tippets. Stay tuned, I might be back shortly with more detailed info on our Alaskan adventure. 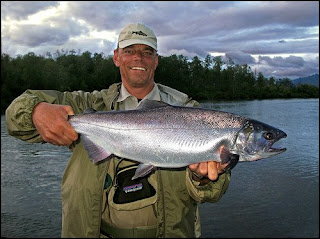 Power packed fresh silvers on the Togiak river in Alaska.

Taco Meeuwsen - 17 april 2021 0
On the self-defense bracelets and the reputation of the women of the Ouled Naïl in Algeria by Mohamed Saadouni and Taco Meeuwsen This paper is a...

Aanbevolen Taco Meeuwsen - 17 april 2021 0
On the self-defense bracelets and the reputation of the women of the Ouled Naïl in Algeria by Mohamed Saadouni and Taco Meeuwsen This paper is a...