We have always tinkered with the forces of nature. But like The Sorcerer’s Apprentice (1) we have a tendency of letting the dancing brooms run amok. We introduce exotic species that then become plagues, we reap forests along hilly slopes that then become landslides, we surface mine for idiotic precious particles and leave behind ruined and barren habitats, we produce toxic waste and store in the earth’s atmosphere. We seem to never quite get it right.

Recently large scale land reconstruction programs are taking place in the Netherlands. The Dutch have always pushed and heaped dirt around to contain water and these new excavating projects are no different. What is different however is the ultimate goal: recreating in a controlled fashion nature’s natural solutions to contain and manage excess waters. In stead of directing our river’s water supply in the speediest way possible straight to the ocean, we have come to understand the need for rivers to flood every once in a while. We don’t like flooding. We hate it with a vengeance. It must be in our blood or so. We thought for a long time that we could prevent flooding by raising dikes. It didn’t work as well as we envisioned. And we kept on raising dikes a little bit more after new and unsuspected rises of water levels. And we kept on seeing the land levels in our claylike country drop. If we were to continue in that fashion the Dutch would soon live in a country that lies for the most part below sea level and is separated by huge insurmountable dikes that go on and on for miles. 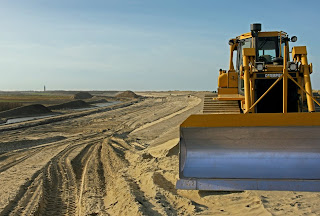 Vast land reforms in the Netherlands to better and more wisely manage our water surplus in the upcoming years.

The Dutch government has published a pretty impressive policy campaign: ‘Treating Water Management differently in the 21 Century’. In it plans are published to rethink water management on a grand scale. We expect seawater levels to rise 60 centimeter in the next century. We expect land levels in the Netherlands to drop up to 60 centimeters in the coming fifty years. We expect rainfalls to increase with some 10% in the following fifty years. And these are just the modest official predictions based on the least dramatic scenarios. Even so the calculations spell disaster if we don’t do something. And so we did.

Deepened river forelands and wetlands are being rebuilt as storage capacity in times of severe flooding. Dikes are actually being demolished in a controlled manner to give rivers and canals access to these storage areas. Free meandering of rivers and streams will be restored in many parts of the Netherlands. In polders (low-lying tracts of land enclosed by embankments known as dikes, that form an artificial hydrological entity) water storage areas are also introduced. All these measures will increase the potential surface water storing capacity. At the same time the final landscaping of these newly created environments is being left largely to nature itself. Wetlands and river forelands can and will for the most part depend on nature to introduce plant- and wildlife. The developing biodiversity will of course be monitored but it will not be managed. Although the Dutch are still the architect of the rough draft of these new landscapes, they are only re-introducing some of the clever solutions nature already had in place to counteract massive peek flooding. This was way before we started to outsmart nature. After the new landscaping has been done, the tinkering with nature will stop. We will watch and see. And learn I hope. 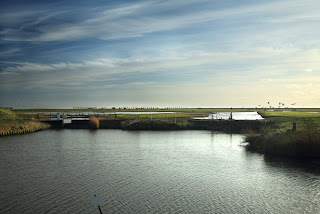 New water storage areas turn to wetlands where nature rules freely (for the most part). Bird Sanctuary Koudenhoek near Ouddorp in the Netherlands.